If you use Telegram regularly, you’ve probably heard of bots. They’re like regular accounts, you can talk to them or have them in groups and they’ll do all sorts of useful things for you.

In this post, I present you the shell bot! Unlike other bots, this one is self-hosted: you use it by running your own instance of the bot in your server.

This handy bot runs commands on demand and sends the live output, allowing you to interact at any time. It can even run graphical apps! 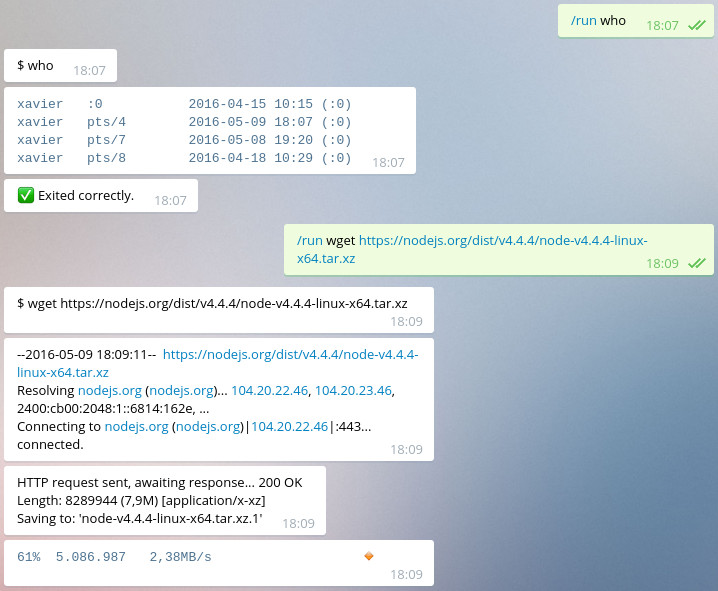 It was made as an example for the botgram framework, but I’ve been using it for some time and it’s proven to be very useful. When you’re on mobile and just want to issue a few commands, talking to a bot is probably more convenient than opening an SSH app and connecting to the server. 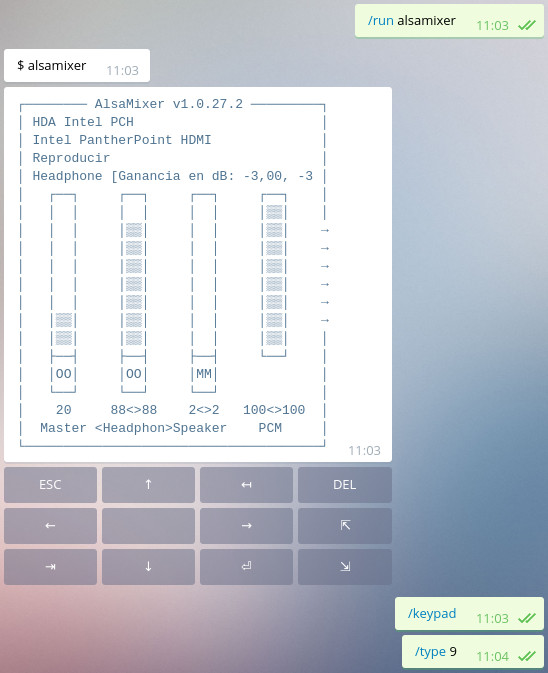 It has creative uses as well: I once was troubleshooting a server problem with some friends, so we added the bot to the group and started playing around. Everyone could see what was going on, and suggest possible causes or things to try.

If you want to have your own shell bot, this post will guide you through the process of creating the Telegram bot itself, and installing the necessary software.

First of all, you need to register a Telegram bot. Don’t worry, it only takes some seconds. Click here to talk to the BotFather, then say /newbot and you’ll be asked some things (name, username, etc.). At the end, you’ll be given an authentication token that looks like the following:

Edit: The bot now lives in its own repository and the installation process has been simplified. If you followed a previous version of this post, remove it and follow these steps from the start.

The following should be done on the computer you want to run commands on. First of all, make sure you have Node.JS installed (you can verify by running npm -v). You’ll also need a working compiler and git:

Clone the project and install dependencies:

Then run the bot for the first time, to create the configuration file:

It will ask you a set of questions, including the auth token that you got from the BotFather, and will ask that you talk to your bot (so it can know who his owner is).

Now that we have everything set up, we can run the shell bot:

Try saying /run uname -a for example, or say /help to learn about the available commands.

Once you’ve played around, you may want the bot to start automatically on boot, and respawn if it crashes. For that, let’s install forever:

Then, from your /etc/rc.local or an init script, call:

Also, it’s a good idea to talk to the BotFather and say /setcommands to define a list of commands your bot accepts. You’ll find this list in commands.txt; just paste the contents when asked. You may also want to change the bot’s profile photo and description.

Did you find the bot useful? Got any suggestions? Feel free to tell me about it in the comments!